Artificial Intelligence is coming and there is no stopping it

The birth of artificial intelligence (AI) is a story of how mankind was able to harness the power of computers. Today, thanks to this technology, we can use our smartphones as GPS navigators and search engines and even talk to our computers like they’re human beings. But how did we get here? How did AI evolve? We’ll explore the history behind this groundbreaking invention and see how it has changed our lives — for better or worse.

Artificial intelligence is the field of study to make machines and computers more intelligent. It has been around since the 1950s but only recently became a buzzword in technology, media and business circles. AI is not a new concept; it refers to the idea that we can create machines that act with human-like intelligence by building computers that learn in a similar way that humans do.

The goal of AI research is to build computer programs capable of thinking like humans do, allowing them to navigate through life’s challenges on their own while adapting to changing circumstances and environments. The field encompasses many different types of research, including robotics (the creation of mechanical robots), machine learning (the use of computers for tasks such as pattern recognition) and natural language processing (understanding language).

The birth of AI in was controversial… and to an extent it still is.

AI is a controversial topic. The birth of AI in 1950s was also controversial, as it raised concerns about the future of mankind and what will happen if machines can think for themselves.

Scientists have been trying to figure out ways to make machines smarter since ancient times, but they didn’t really succeed until now. AI is the study of making machines and computers more intelligent, which means that they can react to their environment better than humans do.

AI has been around for thousands of years, but it wasn’t until 1950s when scientists started working on creating a machine that could think like humans do — and this research led us towards developing artificial intelligence today!

The more advanced artificial intelligence becomes, the lazier humans become as well. Humans need motivation in order to excel and make something of themselves; however, many people are too invested in their devices or other activities that do not require much thought or effort. The result has been a population that values entertainment over evolution.

This has created an environment where many people have lost their sense of wonder when facing new situations because they have already seen everything before via social media or other digital mediums such as video games which often give players only one path through a game without fail (although some games allow you multiple paths). This can be compared to how many people who use GPS routes versus those who learn navigation by landmarks rather than looking at an app on their phone for directions; although both options get them from point A-B successfully there is a big difference between actually knowing where you are going versus just following instructions given by another person or machine!

Additionally since we now rely heavily on machines for our daily routines such as washing clothes or booking travel plans online there may not always be time spent developing other skills like cooking meals from scratch instead relying solely on pre-made frozen foods sold at grocery stores because if something goes wrong with them then just throw away instead fixing anything yourself!

Human intelligence and artificial intelligence have different strengths and weaknesses. Human intelligence is better at creativity, problem solving, and decision making; artificial intelligence is better at logic, memory, and speed. Humans are also better than machines at learning from experience — a skill that comes with being able to see patterns in the world around us. This ability to learn from experience makes humans more adaptable than machines, which are limited by their programming. However, AI can learn from data it processes much faster than humans can learn from each other due to its lightning-fast processing speed: whereas it would take thousands of years for one person’s lifetime worth of experiences to be processed by another human brain (assuming one million new neural connections per second), an AI system could process that same amount within seconds if given access to enough computing power!

Evolution is not a choice, it is a responsibility

Evolution is what we were born to do. We cannot change that fact — the only thing left for us to choose is how we will evolve. Will humanity take on this challenge and evolve their intelligence? Or will they throw in the towel and let AI take over our world?

If humans want to survive in an age of AI, they must find new ways to motivate themselves — they can no longer rely upon external rewards or punishments like food or death because these are no longer relevant. Instead, humans must find intrinsic motivation in their own lives: something that makes them feel fulfilled even if there aren’t any tangible rewards available at all times like food or safety from predators (which may not even exist anymore).

The answer lies within ourselves; if we look deep enough inside ourselves then we’ll discover what truly matters most: happiness! Humans want nothing more than happiness; whether it be through family life or work life or anything else under those umbrellas it doesn’t matter because at its core happiness means being content with who you are without needing anything else as motivation besides yourself (and possibly others). The only way for humans to thrive despite these challenges presented by AIs taking over everything around us is by evolving our intelligence so that we don’t get left behind while everyone else gets smarter faster than ever before.

We deserve the evolution

It is only a matter of time before artificial intelligence becomes more advanced and self-sufficient. The human race needs to evolve their own intelligence as well so they can keep up with AI’s rapid growth. 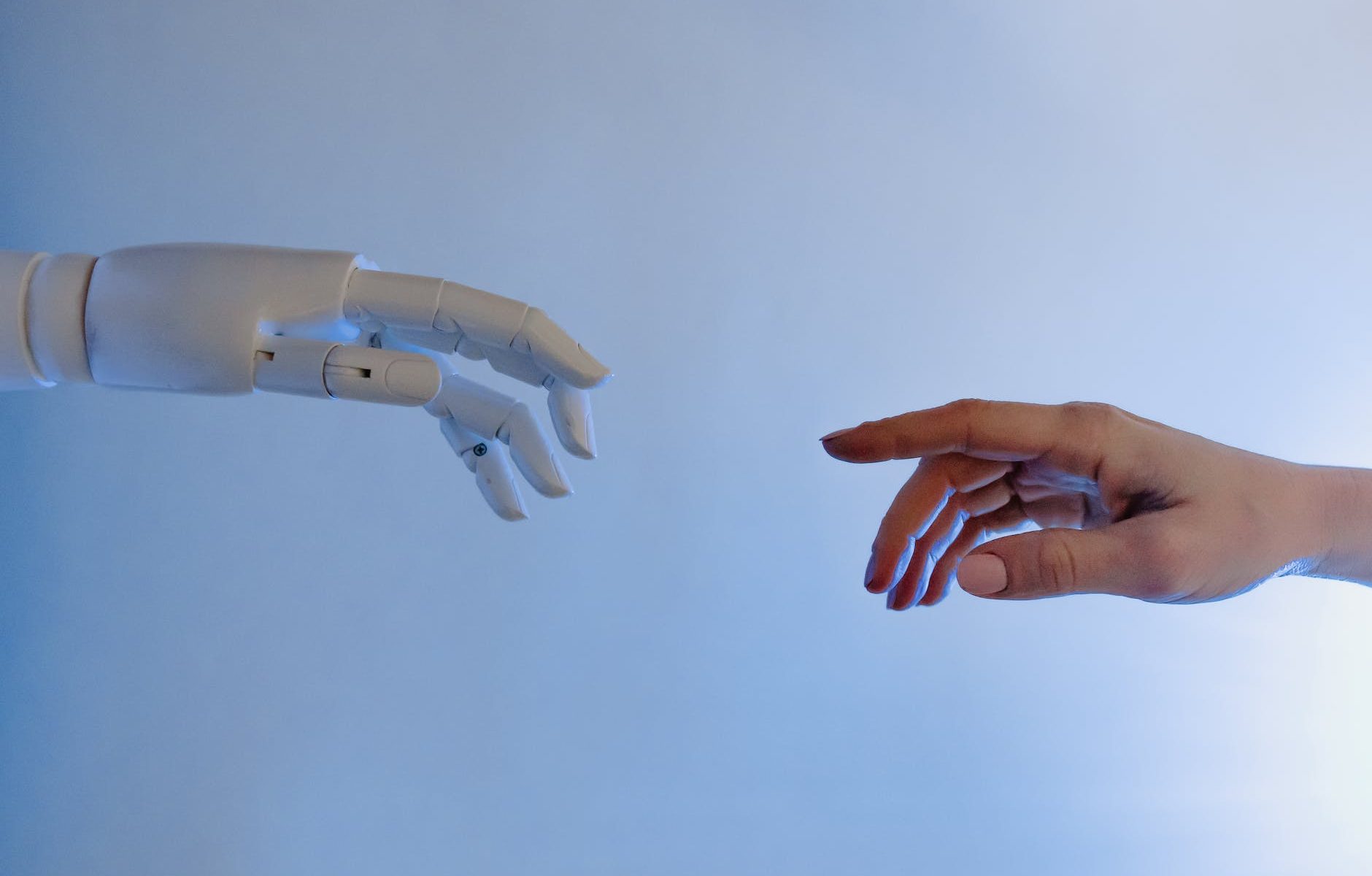 How far has AI come?

Have you ever wondered what an AI-created recipe would look like? Or read an article about a machine learning algorithm that was able to write its own suspense novel? The world of artificial intelligence has been steadily unfolding over the past few years and there have been some truly fascinating developments in areas such as art and entertainment. But what exactly are these machines doing that we previously thought only humans could do? Are they just mimicking our behavior or are they creating something new and different? I’ll explore these questions through examples of AI-generated artwork, recipes, stories, music and more!

Imagine a machine that runs on electricity and sits in the corner of your room. The machine can’t directly observe the world, because it’s not connected to any sensors, but it has access to your mind—so whenever you think about something, the machine imagines what it’s like as well. The question is: how do we know whether or not this machine is imagining anything?

In order for us to be able to tell if an AI is imagining something (and thus demonstrating creativity), we need some way of determining whether or not its output resembles an image or thought that was previously seen by its creator (in this case, us). For example: if I give you a picture and ask you what someone else would see when they looked at it and then gave their own description of what was pictured within that picture—what would happen? You’d probably end up with two similar descriptions! This means there must have been something similar in our minds when each one was describing what they saw in their own words—because otherwise our descriptions wouldn’t have been so similar. Your imagination worked like mine did!

What about AI-created art and entertainment?

The first step was taken by Google’s DeepDream project, which created dreamlike images from artificial neural networks trained on photos. These images have become increasingly realistic over time as AI technology has progressed.

In addition to imagery, machine learning is being used by researchers in music composition (Ludwig van Beethoven would be amazed) and storytelling (the future of filmmaking?).

Is AI just an extension of our human creativity or is it doing something new and different?

In recent years, we’ve seen AI used as a creative tool. It has allowed us to create things that were once impossible – like the first truly lifelike virtual human being in 2015. Every day, we are seeing more and more examples of what AI can do as a creative force in our lives: from helping doctors diagnose diseases faster and more accurately; to creating new materials for industries; to helping people recover from traumatic experiences or ongoing mental health issues.

In some ways, I think AI is just an extension of our human creativity: maybe it can take certain tasks off our hands so that we can focus on other things (like making art). But there’s another possibility too: that AI is doing something entirely new and different – something that has not been possible with human minds alone before now. Perhaps by harnessing the power of machines with huge processing capabilities beyond anything we could ever build ourselves – this might lead us down paths previously untouched by humanity?

Who owns an AI’s creations?

When it comes to creating art and music, AI is still in its infancy. But as the technology improves, there will be questions about who owns what it creates.

This is a question that has been raised by many artists and creators of all kinds in the past; when a machine writes music or writes poetry, whose words are they?

If you want to argue that an AI isn’t creative at all—that it’s just mimicking human creativity—you’re missing the point. A creativity machine is not a human being: It doesn’t have rights or feelings like we do. However, that doesn’t mean we should ignore its ability to impact society in both positive and negative ways.

AI could be used for good or evil purposes—it depends on how people use them (like any tool). But whatever your opinion on that matter may be, it’s important to recognize how this technology can benefit society if used properly. We needn’t fear what our creations might do with their newfound abilities; instead of fearing them, we should embrace them as extensions of ourselves because without them there would be no possibility for new ideas ever coming into existence again!

Where is AI going?

Artificial intelligence is the future. It’s a concept that we’ve been dreaming of ever since the dawn of time, and now it’s finally here. What does this mean for us? Well, it means that everything from medical care to childbirth could be transformed by AI in ways we can only begin to imagine.